11 Quaint + Charming Historic Virginia Towns (That You Haven’t Visited Yet!) 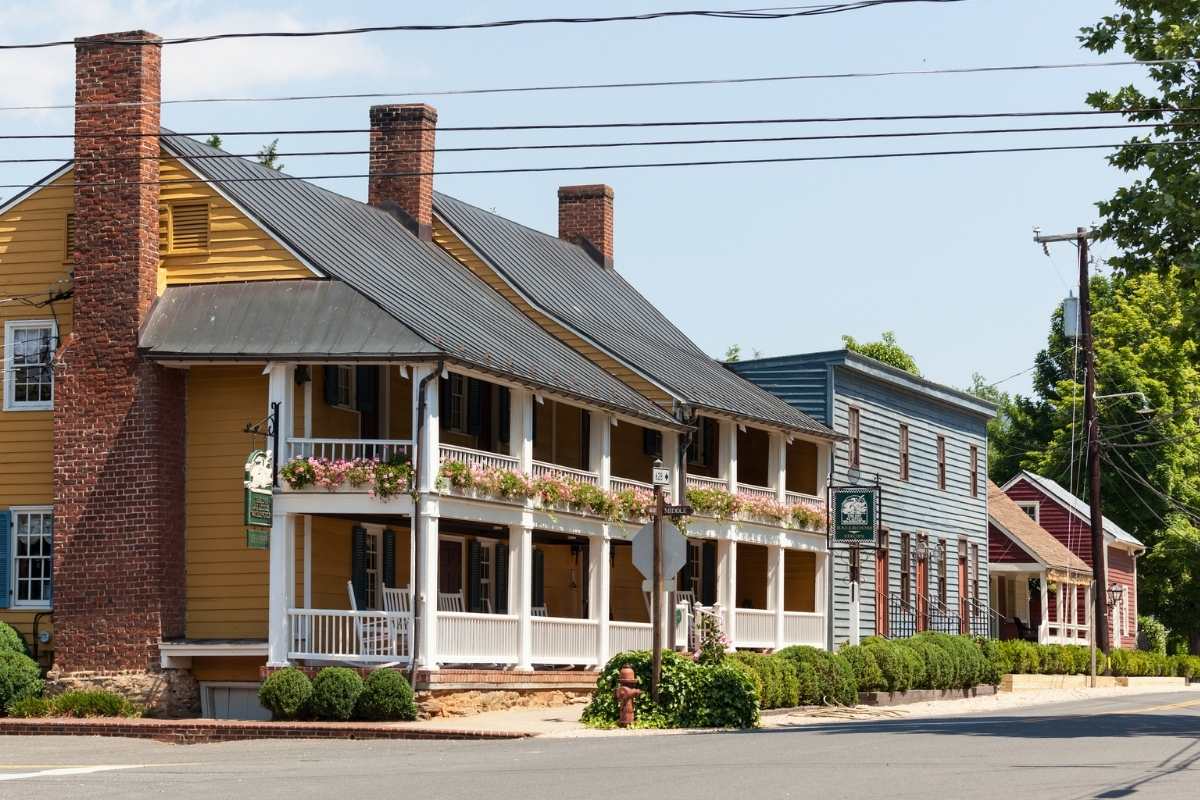 If you love historic places, Virginia is your dream destination. From the earliest settlement in the New World to the crossroads of the Civil War, our gorgeous commonwealth is dripping with history.

And yes, there’s way more to Virginia than president’s houses and colonial Williamsburg. If you’re looking for historic towns in Virginia that are a little off the beaten path, here are our favorites.

The best towns in Virginia for history lovers

Fredericksburg was established in 1671 and is located in the Northern Virginia region of the state. The city is home to a variety of historic sites, including George Washington’s childhood home, Ferry Farm.

Fredericksburg is one of the best historic towns in Virginia. The James Monroe Museum and Memorial Library is located here and honors where the president practiced law.

A visit to Fredericksburg is a step back in time to when the town was a central hub of Civil War activity. The Fredericksburg National Cemetery contains the graves of over 16,000 soldiers who died in the many battles that were fought here.

In full transparency, this is our hometown and we might be a little biased!

Must see for history buffs: A tour of Kenmore Plantation, right at the edge of the historic downtown, will bring back to the early days of America’s independence. if you have time, take a trolley tour and learn all about the town’s history from British rule up through Reconstruction.

Abingdon is a charming historical town located in southwestern Virginia. The downtown area is full of beautiful historic buildings and has a lot of great shops and restaurants.

Abingdon is known for its well-preserved architecture and rich history. The town was founded in 1778 and has played a significant role in the development of the state.

Abingdon is one of the best places in Virginia to find history. The town is home to many historical sites, including the Battle Green (where George Washington was victorious over British forces) and Davis House (the childhood home of Confederate President Jefferson Davis).

Must see for history buffs: The Abington Muster Grounds, where you can re-trace the steps of Revolutionary soldiers, and The Fairview Historic Homestead, a 19th century home with a reproduction blacksmith and mill. Pop into the Historic Barter Theatre for a glimpse of small-town life in the 30s.

Lynchburg was founded in 1757 by English colonists on land that belonged to the Native Americans. It was one of the first settlements in Virginia and is the birthplace of Thomas Jefferson. Lynchburg also played an important role during the Civil War as it was the only city in Virginia that wasn’t captured by Union troops.

This quaint town features a variety of charming shops and restaurants, as well as plenty of outdoor activities for visitors to enjoy.

Culpeper is home to many Victorian and colonial homes, as well as art galleries, shops, and restaurants. The town also has great historical significance in the Civil War. Culpeper’s Cedar Mountain Battlefield is a popular tourist attraction for historians.

Must see for history buffs: The Museum of Culpeper History, which has a large collection of artifacts from the Civil War and early American life. Also check out nearby Elwood Manor, a brick plantation home that hosts the burial of General Stonewall Jackson’s arm.

Lexington is a historic town located in the Shenandoah Valley of Virginia, and it’s one of the best small towns in Virginia, with a gorgeous view of the Blue Ridge mountains.

The town is also home to Washington and Lee University, as well as the Virginia Military Institute. Lexington has a rich history dating back to Colonial Virginia. You can take a carriage ride through the historic district, or stop by the visitors center for a complimentary historic walking tour.

A large home on main street served as a Confederate hospital during the Civil War.

Must see for history buffs: The Stonewall Jackson House, where the Confederate General lived during the early Civil War, and Oak Grove cemetery, which has many well-preserved gravestones. If you have the time, it’s only a 35 minute drive to the fascinating Frontier Culture Museum, a 19th century reproduction village.

Middleburg is a historic (and gorgeous!) town located in Northern Virginia. It was founded in 1787 and has a long history that goes back to America’s earliest days. The town is known for its fox hunting and horse riding tradition. Today it is a wealthy suburb of Washington DC and is known as the hunt capital of Virginia.

The Middleburg Historic District is now mostly high-end shops and restaurants, but there is plenty of history to be found here.

Must see for history buffs: The Red Fox Inn and Tavern, one of America’s oldest continuously operating inns, looks fresh out of the 18th century, and Goodstone inn and Restaurant, is a working farm that maintains a lot of colonial charm.

Orange is a historic town located in central Virginia, surrounded by Civil War battlefields. It was founded in the 18th century and is the county seat of Orange County. The town features a variety of historic buildings and sites, including the courthouse and jail, which are both listed on the National Register of Historic Places.

Interestingly, Orange was also very important during the Civil War. It served as Robert E. Lee’s headquarters from 1862-1864. If you’re interested in visiting the town, you can still visit the St. Thomas Episcopal Church where he worshipped during that time.

Must see for history buffs: James Madison’s plantation home Montpelier has been recently restored and is very well-done with beautiful grounds. if you like Civil War history, Wilderness battlefield is close by.

Often referred to as “Little Washington” and famous for a world-class restaurant, Washington, Virginia is located in Rappahannock County and was surveyed by George Washington himself in 1749. The town is known for its well-preserved historic buildings and sites, including the courthouse and jail, which date back to the late 1700s.

A plaque marks a home on Main Street that served as a Confederate hospital during the Civil War.

Washington, Virginia is one of the best-preserved towns in the state. In fact, the entire town is a national historic landmark. Just walking through the small historic district gives you a glimpse of colonial life in Virginia.

Must see for history buffs: James Madison’s plantation home Montpelier has been recently restored and is very well done with beautiful grounds. if you like Civil War history, Wilderness battlefield (one of the best VA battlefields) is close by.

Clifton is a small town located in northern Virginia, near Washington DC. It’s a historic town with roots dating back to the 18th century. The town has several historic buildings and sites, including the Clifton Mill, which is the oldest gristmill in Fairfax County.

Fairfax Station, just a few miles down the road, is home to Historic St. Mary’s church, where the American Red Cross was founded. There is also a Civil war train station that often has 19th century-inspired events like fairs and fashion shows.

Both Clifton and Fairfax Station offer a glimpse into America’s past, with plenty of historic homes and buildings to explore.

Must see for history buffs: The Clifton Mill, which is the oldest gristmill in Fairfax County, and Historic St. Mary’s church in Fairfax Station, which is the site of a Civil War field hospital and surrounded by a small historic graveyard.

Wytheville is a small town located in southwest Virginia. It was home to many small but destructive Civil War battles.

It is also the birthplace of First Lady Edith Bolling Willson, and her childhood home is available to tour. The small Thomas J. Boyd Museum is home to war artifacts and a particularly interesting exhibit about a polio outbreak in the county.

If you’re tired of Colonial history, the Wilson Museum offers a fascinating glimpse into life during World War I.

Must see for history buffs: The Haller-Gibboney Rock House Museum, a 19th-century physician’s home. Everything from the furniture to the gardens shows you how life was right before the Civil War.

On Virginia’s Eastern Shore is the beautiful and remote town of Chincoteague, which actually dates back to the 1600s.

While it is most popular for the Chincoteague National Wildlife refuge and the wild ponies, it has a long history as well.

Must see for history buffs: Captain Timothy Hill House, a small cabin that is preserved to look like an 18th-century sea captain’s home. Tiny but fascinating.

One of our favorite spots in Virginia’s Shenandoah Valley, there’s more to this charming small town than the caverns.

Luray was a frontier town in the 19th century, and you can visit one of the largest living history museums at the Shenandoah Heritage museum, one of the best things to do in Luray.

Enjoy the historic districts of our commonwealth

Sure, Jamestown and Williamsburg are great. But there’s so much more to see here.

These are just a few of the best towns in Virginia with lots of history. If you’re looking for a charming town with plenty of history to explore, be sure to check out any of these towns!